Listening to the first rains 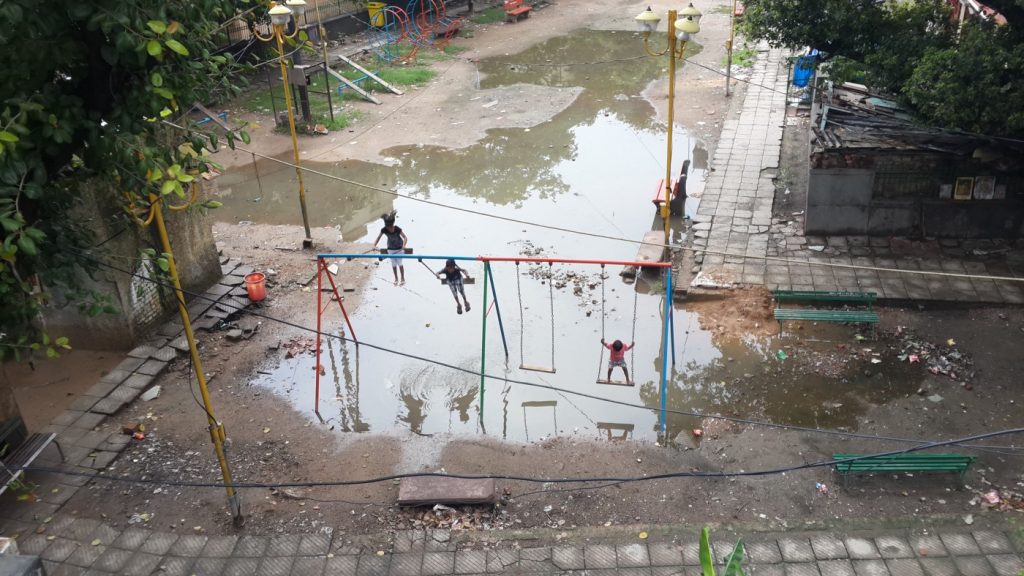 The early summer rains were like the first explorers. They were the first to move out of their homes, those clouds — those wandering white hassocks of hope that people with shrinking eyelids look at beseechingly, during blazing summers. The clouds were like the perfect nurseries, holding a million droplets in their snug, soft white bellies for a bit, before opening their doors to nudge them out. Nudge them out on a long journey whose destination neither knew. Or maybe they did.

The weaker droplets of the lot would flatter to deceive, for they seemed dogged to start with, but eventually would fall short of the demands of that journey. They would lose their shape early on — beautiful spherical forms that became like pendants as they plunged downwards, pointed at the top by the weight their rounded bottom carried. The cold winds would ram headlong into these droplets and depress their faces as they flew downwards. Eventually, these droplets would explode both due to their weight and the winds and become so tiny, that they would become one with the gusts of air that flew around them.

The droplets that kept up with the demands of the journey were probably the wiser ones. Wise, for the ages had whispered into their souls, something so softly that it could never be forgotten. This was the wisdom of love — one that carried the strength of evolution and very often the secrets to reaching one’s destiny. One that had the memory of timelessness. The wise droplets found other droplets to canoodle with and eventually make love to, thereby becoming drops early on in the journey; not too large, for they would break up by the weight they carried, not too small, for they would be scattered around into insignificance by the winds around them. This was the wisdom that the clouds had hoped the droplets would discover as they opened out their bellies to nudge them out.

And so the journey continued. The drops bounced off vagrant clouds or slid down oblique imaginary slides created by air pockets on their way down. The winds flew past, caressing their cheeks, sometimes to the left, sometimes to the right and sometimes even around them.

They eventually came hurtling down closer and closer, to the baked earth beneath. There was a sense of urgency, maybe driven by gravity or by the thirst of the baked earth below, the kind that one feels as they close in on a destination after a long journey. The drops then and thus, left their beautiful pendant forms and turned into comet-like streaks and plunged straight down. They were a million streaks, many millions mabye, many more than what survival sought. And as they descended to the earth, the smell, the spirit and the relief that only a few destined heavens carry, came along with them. These were the explorers, the first rains, the ones that initiated the ritual passing of secrets to the world starved of them.

Some became grand rivers and imposing rainforests. Some became stately trees while others became tenacious creepers. There were the menacing waves, cheerful splashes, and lonely ponds as well. Some held lives while others death. Some hid themselves as seeds, while many others laughed out as bright flowers. The wisdom now lay scattered everywhere. For those who wanted to find them.

They sang their songs of wisdom to the soles of some rare naked feet. To the eyes that opened their eyelashes to them. To children for brief moments before they were yanked back by adults into shelters. They also spoke to the lunatics, the intoxicated and few other estranged ones who the rest of the world looked down upon.

A small puddle of water abandoned by the rains earlier in the day seemed to fill the broken and recessed sacs of the road. Every now and then near-molten rubber from the cars and trucks of unknown drivers, mostly sullen and angry from relentless roads and heat, impaled these puddles fleetingly, sending most of the water flying out in exhilaration. Exhilaration because these waters would then start their unseen journey back to the nurseries, back to carrying and delivering the secrets that they were meant to. A few were left behind in the puddle waiting for the receding summer sun to work itself into their souls to get them to vanish so they could live all over again. To tell the same secrets. Even if there was just one more soul willing to listen.